The eighth time around Lake Viljandi

This time the Grand Race Round Lake Viljandi was held for the 93rd time. I started to participate in 2015. Unfortunately, last two years have not been very successful. In 2020 I „completed the mission“ dispite an injury. Last year I was at the start but I did not finish. That was one of those few times when I had a total „burnout „ in its direct meaning. I was able to really overthink my life there. On the back of my head the old injuries were hunting me and Weather conditions were also not the best for me.😊

This year while signing up I sat my goal to finish the run as content as possible. This year I have managed to train quite good and I feel much more confident. In addition, I have already opened the season for me by prticipating in two competitions – Highway Race Haapsalu and Race Sinilille. I was quite sattisfied with the race in Haapsalu but I did not achieve my very maximum. Race Sinilille was a total disappointment for me but like The Beatles song says „Let it be“.

Now about that race in Viljandi. I tried not to think about the competition so much and etc. The night before the run was quite restless, which is a good sign for me. Before the competition there wasn´t a single reason why I should get jitters or start to be nervous. Of course that injury was still hunting me on the back of my head but a litle punch there helped me to get rid of those ideas. After the opening sound of the race the first two hundred meters I took pretty easily to save myself a fall because of the „struggeling“ at the start. At the first kilometer I tried to find a safer and comfortable way for me. – And there it was, the first „pearl“, rising Huntaugu. – Last year I retired there. I felt how the anxiety rose in me, being among a crowd I tried to find a tougher ground to get uphill faster. I noticed some people who had run passed me earlier were now coming very fast towards me but with their back first. I think I took the rising even too easily. Usually I take a few meters to recover from a rise but this time I didn´t need to. I myself was surprised.

Now I could really run properly and on a comfortable ground till the turn of bridge Orika. Usually that part of the track wouldn’t cause any trouble for me but this time it was slippery until the first field. I was looking for a drier and tougher ground. The first part of the field started with a raise which usually makes my legs a bit „soft“ but this time it was really ok!. I joined the „line „ to make it easier and less tense for me. Meanwhile having reached to the gravel section of the path I chose a more suitable tempo for me and I targeted to reach to the other field section. – It was even softer so I kept to my own pace what might have been not the best choice. Decending to crossroad Viiratsi where in usual situation I have been able to run downhill „full speed“ did not work out for me this time. – And now started the last two kilometers. At first there was a headwind what gave me a fright but I forgot about it fast and I tried to keep the pace and even add on it in the last 500 meters.

Suurjooks It was time to run around Viljandi Lake 0:54:06 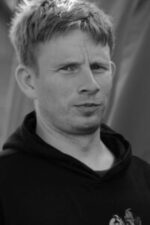